Abibiman Foundation on 19th August 2016 participated in the 2nd ordinary general meeting of the Ghana Alliance for Clean Cookstoves (GHACCO) as member of the Alliance. The 2nd ordinary general meeting was held to brief members of the achievements and on-going activities of the alliance and to discuss new developments for effective promotion of clean cookstoves in Ghana towards the achievement of the sustainable energy for all agenda.
The workshop saw the participation of about 50 members including the presence of Arjit Basut and Kwesi Sarpong of the Global Alliance for Clean Cookstoves who also briefed the members on the programs that the Global Alliance is implementing in Ghana and West Africa which includes the Awareness Creation Campaign and lessons learnt.
Executives from the Regional Steering Committees from the Ashanti (Mr. Michael of Man and Man Enterprise)and Greater Accra regions were also present and shared their activities for the year, challenges and experiences and plans for the rest of the year.
The meeting provided opportunities for members to be updated on on-going activities including the evidence based advocacy voices for Change project of SNV, the awareness creation campaign, elections of regional executives and the clean cooking festival of the Ghana Education Service aimed at educating youth on the clean cooking.
Mr Kenneth Nana Amoateng is a Naitonal Executive Board member
Posted by Kenneth Nana Amoateng at 2:10 AM No comments:

Madam Chairperson,
H.E Mrs. Pavely Tenal Musaka,
The minister of Mesti, Hon. Mahama Ayarigah,
The Minister of foreign Affair and Regional Integration, Hon. Hannah Tetteh,
The minister of Education, Hon. Prof. Jane Nana Opoku-Agyeman,
All protocols observed,
The issues of climate change and food insecurity have become topical around the globe. The agricultural sector is highly vulnerable to climate change, especially where farming relies heavily on rain. African countries are particularly vulnerable to climate change because, in addition to their dependence on rain-fed agriculture, they experience high levels of poverty, low levels of human and physical capital and poor infrastructure.
As both staple and cash crop agriculture are almost entirely rain-fed, rainfall variability during the growing season leads to fluctuating food production from year to year. Changes in rainfall also often lead to reduced harvest of staple foods, thus contributing to food insecurity.
Madam Chairperson, distinguished guest, many crops have annual cycles, and yields fluctuate with climate variability, particularly rainfall and temperature. Maintaining the continuity of food supply when production is seasonal is therefore challenging. Droughts and floods are a particular threat to food stability and could bring about both chronic and transitory food insecurity. Both are expected to become more frequent, more intense and less predictable as a consequence of climate change.
In rural areas that depend on rain fed agriculture for an important part of their local food supply, changes in the amount and timing of rainfall within the season and an increase in weather variability are likely to aggravate the precariousness of local food systems.
It is to be noted, the affordability of food is determined by the relationship between household income and the cost of a typical food basket. Global food markets may exhibit greater price volatility, jeopardizing the stability of returns to farmers and the access to purchased food of both farming and non-farming poor people.
Madam Chairperson, distinguished guests, the change in seasonality attributed to climate change can lead to certain food products becoming more scarce at certain times of year. Such seasonal variations in food supply, along with vulnerabilities to flooding and fire, can make livelihoods more vulnerable at certain times of the year. Although these impacts might appear indirect, they are important because many marginal livelihood groups are close to the poverty margin, and food is a key component of their existence.
Agriculture is often at the heart of the livelihood strategies of these marginal groups; agricultural employment, whether farming their own land or working on that of others, is key to their survival. In many areas, the challenges of rural livelihoods drive urban migration. As the number of poor and vulnerable people living in urban slums grows, the availability of non-farm employment opportunities and the access of urban dwellers to adequate food from the market will become increasingly important drivers of food security.
Agriculture-based livelihood systems that are already vulnerable to climate change face immediate risk of increased crop failure, loss of livestock and fish stocks, increasing water scarcities and destruction of productive assets. These systems include small-scale rain fed farming, pastoralism, inland and coastal fishing and forest-based systems. Rural people inhabiting coasts, floodplains and drylands are most at risk.
The urban poor, particularly in coastal cities and floodplain settlements, also face increasing risks. Among those at risk, pre-existing socio-economic discriminations are likely to be aggravated, causing nutritional status to deteriorate among women, young children and elderly, ill and disabled people. Future vulnerability is likely to affect not only farmers, fishers, herders and forest-dependent people, but also low-income city dwellers, in developing countries, whose sources of livelihood and access to food may be at risk from the impact of extreme weather events and variable food prices, and who lack adequate insurance coverage.
Madam Chairperson, distinguished guests, the youth run the risk of them also contributing to climate change and failing to mitigate it, just as past generations have been doing. In order for the youth to actively and meaningful participate and influence development into the direction of climate resilient development, it is important that they understand these issues and the challenges to their achievement.
Given this scenario, there is need to allow the youth to actively participate in addressing the climate change problems, not as victims but more importantly as solution providers. It is in this context that the African youth should be recognised (not only on paper) as an age group with a lot of potential in addressing the climate change problem which spans within and across generations.
Madam Chairperson, distinguished guest, in order for Africa to achieve climate resilient development, there is a need create appropriate packages for climate change adaptation and mitigation for the youth in particular. If the youth are not actively involved in the current climate change adaptation and mitigation efforts, they themselves when they pass the youth stage will keep on doing the same old ways which have been found to go against the objective of climate resilient development.
This therefore require everyone’ participation, which calls for the active participation of the youth; it is in the youth that today and tomorrow’s development foundation is anchored. Growing attention to climate change and sustainable development offers a chance for green economic growth. Green jobs not only provide much-needed employment opportunities for youth, they also give the youth an outlet to contribute directly to the fight against climate change by adopting green behaviors in their private lives.
Thank you
Kenneth Nana Amoateng
Abibiman Foundation-
http://www.abibimmanfoundation.org 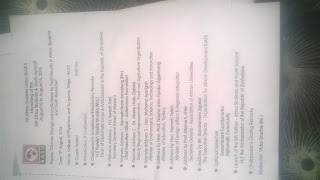 http://www.modernghana.com/news/711664/speech-delivered-by-abibiman-on-the-5th-africa-students-and.html
Posted by Kenneth Nana Amoateng at 9:53 AM 2 comments:

Abibiman Foundation wishes to congratulate the parliament and Government of Ghana for the ratification of the Paris Agreement. This is the first bold step in the quest for sustainable development and the pursuance of clean energy and to that extent, sustainable energy for all.
The parliament of Ghana officially ratified the Paris Agreement on Climate Change on the Thursday 4th of august 2016. This comes to play as we work towards achieving the sustainable development goals and to put an end to fossil fuels and move to cleaner forms of energy.
We recognizing that climate change represents an urgent and potentially irreversible threat to human societies and the planet and this requires the widest possible cooperation by all countries and their participation in an effective and appropriate international response. Parliament’s ratification of the Paris Agreement now make it legally binding on us to pursue the agenda of the Paris Agreement.
This Agreement, in enhancing the implementation of the Convention, including its objective, aims to strengthen the global response to the threat of climate change, in the context of sustainable development and efforts to eradicate poverty, including by first of all, holding the increase in the global average temperature to well below 2 °C above pre-industrial levels and to pursue efforts to limit the temperature increase to 1.5 °C above pre-industrial levels, recognizing that this would significantly reduce the risks and impacts of climate change. Also, increasing the ability to adapt to the adverse impacts of climate change and foster climate resilience and low greenhouse gas emissions development, in a manner that does not threaten food production; making finance flows consistent with a pathway towards low greenhouse gas emissions and climate-resilient development.
This Agreement will be implemented to reflect equity and the principle of common but differentiated responsibilities and respective capabilities, in the light of different national circumstances. Abibimman Foundation recognizes the efforts of Government in its quest to address the issues of climate change which the country now faces its effects across the various sectors. The energy sector is one of the worst hit by climate change as the country struggles to put an end to the power crisis through some interventions. We therefore congratulate the government and also express our support to the government in ensuring the best for our communities and work towards achieving the sustainable development goals.
Abibiman Foundation- http://www.abibimmanfoundation.org
http://www.modernghana.com/news/710366/abibiman-foundation-congratulates-parliament-for-the-ratific.html

http://www.modernghana.com/news/710366/abibiman-foundation-congratulates-parliament-for-the-ratific.html
Posted by Kenneth Nana Amoateng at 9:47 AM No comments:

Kenneth Nana Amoateng
Social activist helping implement change and also giving back to society the return of its investment in me.creating a global community of young people who are ready to solve development challenges. Working with a wide range of school children, youth, university students’ movements and local communities