Coalition of Animal Rights and Welfare Action in Ghana. (CARWAG)

Animal Rights and Welfare: A call to peaceful coexistence.
Animals, be it wild or pet, food or sport, there is much humans must do to be humane towards them. Some years back, Ghanaians were agitating for freedom and they finally became the first sub-Saharan country to gain theirs. Other countries followed and still are. Non-human animals sadly, have no champion, but fortunately some humans have stood up for them in many countries. Ghana is now gaining grounds as an online search can reveal to you there are animal right activists in the country. Critics of animal rights argue that animals are unable to enter into a social contract, and thus cannot be possessors of rights, a view summed up by the philosopher Roger Scruton, who writes that only humans have duties, and therefore only humans have rights. One may ask, what are animal rights and animal welfare and how similar or different are they? The simple answer to that is: Animal rights is the philosophy of allowing non-human animals to have the most basic rights that all sentient beings desire: the freedom to live a natural life free from human exploitation, unnecessary pain and suffering, and premature death. This is what the animal rights movement is about; it is not about working for equality between human and non-human animals. Animal welfare on the other hand seeks to alleviate the suffering of animals while they are being exploited, without attempting to question the fundamental basis of whether it is acceptable to exploit animals in the first place. How does humanity intend to solve differences among its own species when it cannot learn to make peace with the other animals on earth? Humans need to start thinking and living in terms of co-existence, as opposed to dominance. You certainly do not have to love your neighbors, but you should be able to get along with them. Peace begins with the individuals who make a conscious effort to go through life making the least negative impact possible. The 21st-century debates about animals can be traced back to the ancient world, and the idea of a divine hierarchy. In the Book of Genesis 1:26 (5th or 6th century BCE), Adam is given "dominion over the fish of the sea, and over the fowl of the air, and over the cattle, and over all the earth, and over every creeping thing that creepeth upon the earth." Dominion need not entail property rights, but it has been interpreted, by some, over the centuries to imply ownership. However, Bernard Rollin writes that "dominion” does not entail or allow abuse any more than does dominion a parent enjoys over a child. According to Immanuel Kant, cruelty to animals is wrong only because it was bad for humankind. He argued in 1785 that "cruelty to animals is contrary to man's duty to himself, because it deadens in him the feeling of sympathy for their sufferings, and thus a natural tendency that is very useful to morality in relation to other human beings is weakened. There is a saying which reflects how animals’ rights have been abandoned by their neighbours (humans in this sense):
When they came for the socialists, I didn't do
anything, for I wasn't a socialist.
When they came for the Gypsies, I didn't do
anything for I wasn't a Gypsy.
When they came for the Jews, I didn't do
anything for I wasn't a Jew.
When they came for me, there wasn't anyone
left to do anything for me.
So the choice is ours. We can seek for the welfare of animals or their rights, and it all depends on background factors, such as gender, occupation, type and level of education, religion, and one's attitude towards nature. This is because, animals whether kept as a pet or food at least deserve:
1.      suitable environment to exhibit normal behaviour patterns,
2.      housed with, or apart from, other animals,
3.      suitable diet and water
4.      and be protected from pain, suffering, injury and disease.
Abibimman Foundation is therefore dedicated to promoting Animal welfare and rights in Ghana and the World. Let’s Join hands and create an environment for peaceful coexistence with our neighbours: animals. If you are interested, call or send an Email to Join the Coalition of Animal Rights and Welfare Action in Ghana. (CARWAG) 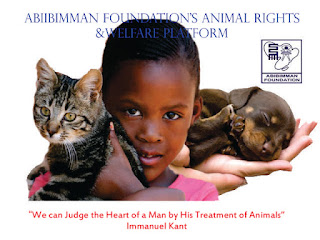 Kenneth Nana Amoateng
Social activist helping implement change and also giving back to society the return of its investment in me.creating a global community of young people who are ready to solve development challenges. Working with a wide range of school children, youth, university students’ movements and local communities